Roger Anthony Swainston is an Australian painter.
Naturalist and zoologist,
he is one of the most recognized artists of the underwater world

Most of my working life has been spent trying to capture the elusive colours, surfaces and forms of the marine world.  For many years I worked almost exclusively with fish. The discipline of researching them, closely examining, drawing and then painting more than 6000 of them has given me not only a profound knowledge of my subjects but also an intimate understanding of the techniques and materials I use to paint them.

"A LONGTOM SHIMMERING IN CRYSTAL-CLEAR TROPICAL WATERS COULD BE A PURE DISTILLATION OF LIGHT, WATER AND COLOUR; A PERFECTLY CAMOUFLAGED STONEFISH COULD HAVE SPONTANEOUSLY GENERATED FROM THE LUMPY ALGEA-COVERED ROCKS THEMSELVES. FISHES ARE FORM AND FUNCTION AND HABITAT MADE FLESH....."

Over the years my work has diverged somewhat into two principal streams; the continuing work of painting portraits of a variety of marine animals and the work trying to capture from life the underwater world on a broader scale. Working on portraits of fishes and crustaceans still captivates me, their variety and beauty is an endless inspiration. From simple identification illustrations I have gradually moved towards creating life-sized and life-like studies of individual animals, capturing their character and their unique presence. I am presently working on life-size paintings of all the worlds species of Rock Lobsters from specimens, a quest which will take years to accomplish.

"THE PATTERN OF SCALES ON THE FLANK OF A FISH APPEARS PERFECTLY REGULAR AND EVEN, YET NO TWO SCALES ARE ALIKE AND EVEN THEIR ALIGNMENT IS NEVER EXACT. HEREIN LIES THE GREAT CHALLENGE OF PORTRAYING THESE ANIMALS, CAPTURING THIS “ORDERED RANDOMNESS”....

For several decades I painted thousands upon thousands of illustrations of marine life, mostly created from underwater photographs and specimens, usually preserved in museum collections. The urge to work from life was a constant and relentlessly growing desire. Even after many years of diving and underwater photography I still felt I was not achieving that. So, after many years of musing (and a fair amount of procrastination) I developed materials and methods and in 1995 in the Red Sea off the coast of Yemen I embarked upon an entirely new adventure; drawing the reef underwater. From the very first I was captivated, it was difficult, but not insurmountably so, and immensely rewarding.  My drawings evolved rapidly as I became accustomed to a host of new challenges, though the materials and methods have remained almost identical to this day.

"DRAWING UNDERWATER IS ALL ABOUT TECHNICAL CHALLENGES, ONE AFTERANOTHER. MATERIALS AND TECHNIQUES, BUOYANCY, CURRENTS, COLD, AND SOFORTH. THE DIFFICULTY REALLY LIES IN MAKING SENSE OFTHE ENORMOUSAMOUNT OF DETAIL WE ARE CONFRONTED WITH WHEN LOOKING CLOSELY AT ACORAL REEF......

The first black and white underwater drawings of the reef led to the works which I call "ecosystem portraits". Creating the drawings requiresmany hours spent motionless on the seafloor observing the life of the reef, returning every day to the same position to capture meticulously each section of reef. This discipline, which can include 4-5 hours a day underwater every day for anythingup to three weeks, provides an understanding of the ecology of the reef. Constant photography of individual animals, both resident and transitory provides the visual record of this and they are combined with the detailed reefscape of the drawing to create paintings which capture the ecosystem as a whole. These works, which occupy many months in the studio, are an in depth study of a functioningecosystem, its multitudes of life forms, doing what they do, in the relative abundance in which they are found and in the particular niches they occupy. The paintings are also a baseline, a benchmark of the condition of the reef at the time they were created.

"SOME DAYS IT'S A REAL EFFORT TO MAKE MYSELF PUSH ON, THROUGH NASTY CHOP AND STRONG WINDS. BUT ONE THING IS ALWAYS THE SAME, THAT MOMENT WHEN I ROLL BACKWARDS OVER THE SIDE OF THE BOAT AND I'M UNDERWATER AGAIN; FREEDOM, WEIGHTLESSNESS, I'VE CROSSED OVER INTO ANOTHER UNIVERSE AND IT FEELS LIKE COMING HOME."

In 2001 I began my project to create five of these large underwater paintings from the Ningaloo Reef, a selection of differing environments from around Coral Bay. An interesting offshoot of this was the idea, which seemed obvious once I began the work, to continue to follow the particular sites I had portrayed over the years and observe how they developed and evolved over time. So I have been returning to these same sites every year since 2001 to take photomosaics of them from the exact same spot from which I created the initial drawings. These are now growing into a fascinating record of change over an extended period. I hope to continue this work for as long as I am able to continue diving, hopefully for many more years to come.

WHEN I LOOK AT A REEF AS A SCIENTIST I AM INTERESTED IN WHAT IS THERE,HOW IS IT WORKING, WHAT IS SHAPING AND CONTROLLING THAT PARTICULARENVIRONMENT. AS AN ARTIST I AM TRYING TO COMMUNICATE THAT TO THEVIEWER. THERE IS NOT SO MUCH AN INTERNAL CONFLICT AS A CONSTANTLYCHANGING FRONTIER BETWEEN THE TWO. WHERE DOES THE DETAILEDOBSERVATION AND METICULOUS DEPICTION OF THE SCIENTIST BECOME THEINTERPRETATIVE AND INTUITIVE VISION OF THE ARTIST? 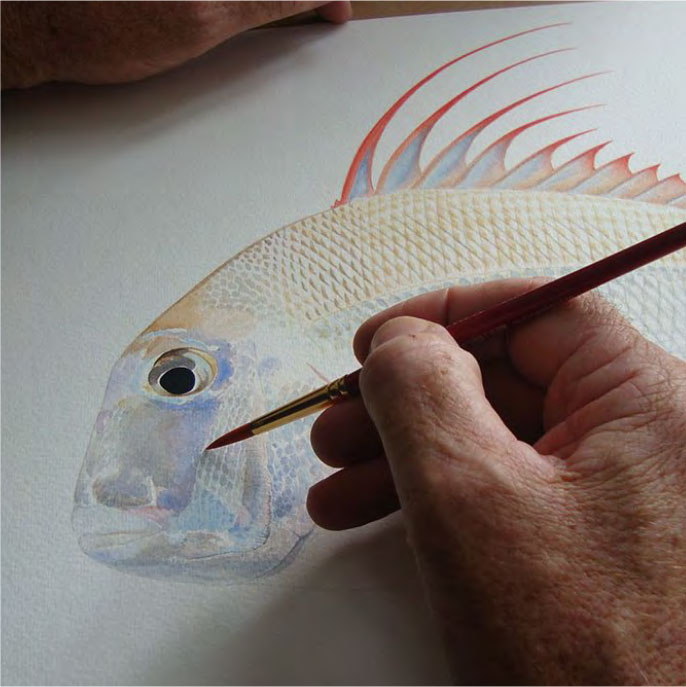